Just one month to go. As I have said elsewhere, the next POMs is being organized by Travis Dudding for November 4 - 6, 2016, at Brock University, in St. Catherines, ON.

The primary web address for the 44th POMs is HERE - from which one has access to the "Registration", here.
To quote from the meeting's website -
" The 44th Ontario-Quebec Physical Organic Mini-Symposium (POMs) will be held on November 4th-6th, 2016 at Brock University. POMs is one of the premier North American physical organic chemistry symposiums held annually to showcase recent research in all fields of science pertaining to physical organic chemistry such as bio-organic chemistry, theoretical organic chemistry, organic photochemistry, and mechanistic studies. This conference strongly encourages the active participation of graduate students and post-doctoral fellows. ​Participants are able to present either a short talk or poster presentations on recent work in the friendly, but rigorous atmosphere of a POMs meeting. "
Posted by Ossiest at 4:07 AM No comments:

Next POMs in Windsor

As predicted months ago, using non-standard, non-linear, ad hoc methodology, the 43rd Ontario-Quebec POMs is being organized by Holger Eichhorn at the University of Windsor.  The dates for it are Friday, October 30 - Sunday, November 1, 2015, and the website link is .... HERE.

For future reference, Travis Dudding has offered to host the 44th POMs at Brock University, in 2016.

Posted by Ossiest at 7:47 PM No comments:

I was there, where were you?

The 42nd POMs, held at McMaster on November 7-9, 2014, is now in the history books. There were just over 50 registrants, some of whom presented the 21 talks and 15 posters. The topics ranged from - Acetylation to Zinc catalysis. The pdf of the program was - here.
As we have come to expect at POMs , the quality of the student talks and posters was very high, in part because "our protégées" really know how to take advantage of modern graphics packages and how to use Powerpoint well.  I think us profs should take lessons from them!
Several speakers made references to former Mac professor John Warkentin, who died earlier in 2014. They included John Pezacki and Adrian Schwan (below), and the after-dinner speaker (moi, Ossie Tee) at the Banquet held in the University Club. My after-dinner speech largely involved a few serious and several amusing incidents involving JW over many years.
John Pezacki (NRC, Ottawa) gave the last talk, entitled "Using Physical Organic Chemistry as a guide for how to best label living Bacteria". He dedicated his talk to the memory of John Warkentin who was his Ph.D. supervisor and long-time mentor. He suggested that JW's oxadiazoline method for generating nucleophilic carbenes should be referred as the "Warkentin Method".  Also, he reminded us of the J. Warkentin bursary, at McMaster, and encouraged us to support for the benefit of the next generation of chemists at McMaster. Donations may be made to the John Warkentin Bursary through -- www.givetomcmaster.ca - specifying where the contribution is to be directed.
Sponsors of the 42nd POMs were the Faculty of Science, the School of Graduate Studies, and the Department of Chemistry and Chemical Biology, all of McMaster University, and also the Hamilton Section of the C.I.C. They afforded the prizes awarded to students: for talks - Serena Singh (Kluger, Toronto) and Lee Belding (Dudding, Brock); posters - Roya Mirabdolbaghi (Dudding, Brock) and Seyedeh Taimoory (Dudding, Brock). So, the Travis Dudding Group (below) almost had a shut-out.
Reminder: This year's POMs is scheduled for the University of Windsor, where the contact person is Holger Eichhorn. The website link is … here. 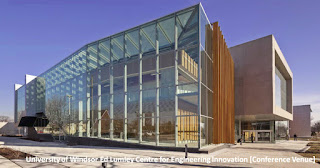 Posted by Ossiest at 6:21 PM No comments:

The 43rd POMs is being organized by Holger Eichhorn at the University of Windsor.  The dates for it are Friday, October 30 - Sunday, November 1, 2015, and the website link is .... HERE.

Posted by Ossiest at 4:35 PM No comments:

"Listen very carefully, I shall say this only once" - The website for the next POMs is up and running at ... http://poms.mcmaster.ca, as was foretold.

To be sure of your place at the Banquet, you should register before October 24th.  The e-mail address is poms@chemistry.mcmaster.ca
Now, it's a good time to register!

Posted by Ossiest at 1:03 PM No comments:

This is to confirm that the dates of this year's POMs at McMaster are November 7, 8 and 9.

As indicated already, the contact person is Willie Leigh.  The meeting website will be located at …. Poms.McMaster.CA.

Posted by Ossiest at 1:24 PM No comments:

As some of you know already, my long-time friend and M.Sc. supervisor, John Warkentin, died on March 30th. His family obituary is - HERE.
John came from Grunthal, in southern Manitoba, and was a student at the University of Manitoba, in Winnipeg.  After completing his B.Sc., he worked on his M.Sc. with Gerry Dunn (1919-2013) there, and then went south to Iowa State College to work with George Hammond (1921-2005) for his Ph.D. degree.  When George moved to Caltech, John joined him briefly as a post-doc, and then had a longer post-doc stint with Paul Bartlett (1907-1997) at Harvard.  So, his credentials were pretty sound!

In 1960 John went on staff at McMaster, and I worked with him during 1963-65. Later, he got tenure and promotion, and he remained at Mac until he retired in 1996, but he continued doing research for several years after. Over the years John carried out various responsibilities in his Department up to Chairman.  He also contributed to his profession - helping to organize symposia, refereeing, working as an Associate Editor for Can. J. Chem., and serving on NSERC Committees, at least once as chairman.
John was a fine scientist, an excellent teacher, a mentor and role model, as well as a solid friend to many of us. He was widely known and respected for his research in the area of free radical and carbene chemistry.  Many of his mechanistic and synthetic studies involved studies of oxadiazolines which he showed to be versatile precursors of of diazo compounds (upon photolysis) and of carbenes (upon thermolysis), as depicted below.

John and his students were frequent participants in POMs meetings, and they also talked about their research at national and international symposia.  His reputation overseas was such that he collaborated with several reputed chemists around the world, well as in Canada.

The upcoming 42nd POMs at McMaster in November will be an excellent time to remember John and his contributions to physical organic chemistry, to his Department, and to his profession.
Posted by Ossiest at 3:20 PM No comments: